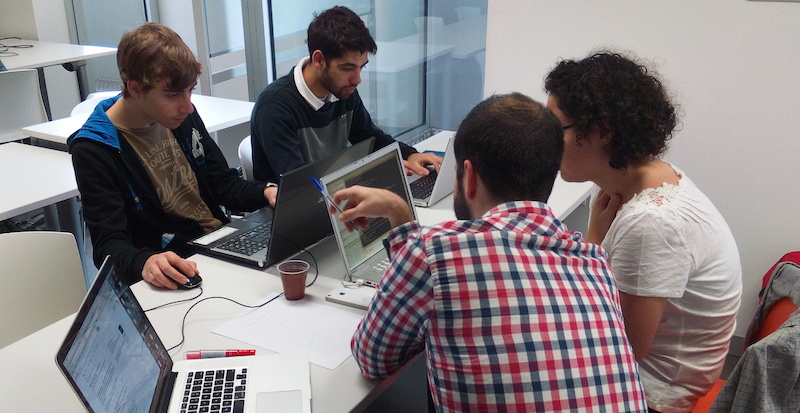 Throughout Open Data month, people gather in cities around the world to celebrate the power and value of open data. They write applications, liberate data, create visualizations and publish analyses using open public data to show support for and encourage the adoption of open data policies by the world’s local, regional and national governments.

We joined this show of support by co-organising the first open data Hackathon in Las Palmas, Spain.

25 Developers from the island and a range of countries (from Colombia to the Netherlands) came together, in a friendly environment to work with the island's open data systems and hack. Curious citizens, developers, students, scientists, graphic designers took the chance to learn, hack, blog and just plain hangout.

After a presentation from the Mayors’ Office on the available data, people brainstormed Hacks, pitched their ideas, voted on what to work on and formed teams. The purpose of the weekend was to learn, explore and have fun!

The five teams formed worked on the following projects:

BabyBoom: Take a look at national birthing statistics in Spain and how and if they correlate with key events. “We were extremely surprised at the results. We assumed times of great national success and fun for Spain (such as Carnival or Footbal wins) would lead to an increase in births nine months later. In fact, mostly the opposite was true.”

Naughty Tourist: Pulls data on beach ordinance violations so you can navigate the city via violation.

Where to Go: Get event suggestions for Las Palmas based on your Facebook likes and Interests. “This lets you easily, as you get off the plane on the island, see what events are going on, that might be of interest to you”

Hot or Not for Statues: Discover the many statues of Las Palmas! “The city has tons of statues. This was a light-hearted, fun project for our team. Later functionalities we thought of adding were review options and navigation, so that once you say a statue is “Hot” , you get information to visit it.”

Traffic Cam Selfie: Get an alert when you are near the ten traffic light cameras in the city and take a selfie!

Based on this experience, for Hackership, we plan to introduce a Hack Day as part of our curriculum, early on in each Batch. For everyone involved, this weekend was a chance to play and learn, and seeing how far you can get in a day or a weekend, working in a team is really energising. “I built this. I can do this”. (Plus sometimes, hackathons with lots of people and huge prizes can become super competitive and a bit intimidating.) So if you are thinking of applying for the next Batch, expect this new addition to the programme!

Many thanks to the GDGC (Google Developers Gran Canaria group) for co-organising a fantastic weekend, to SPEC for providing us with a great workspace and refreshments and to the Mayors Office for the datasets and information.

Thanks to Benjamin Kampmann for being handy with his phone and taking photos at the event.